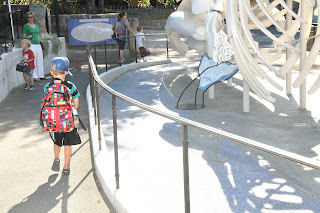 The difference between my first and second children is pretty clear and they both have amazing strengths. Keller's came into play last week. Vera has done camps in the past, but she will only do a camp if she has a friend or friends that will also be in it. Keller's first camp EVER started last Monday and he knew no one.

He walked cool as day up to the Natural History Museum, refused to take a photo, and entered the classroom with no hesitation. I made him give me a kiss after putting away his backpack and he was off. He walked over to the group of kids playing on the rug and integrated himself into the class dynamic. He didn't even look up as his family exited the room.

The other difference, Vera after pick-up will give me every detail that happened during the day and recite all the facts that she learned. Keller focused on one favorite activity of the day and that was about all I could get out of him. When prompted, I could squeeze out some information, but for the most part I just let him be. He said he liked it and is looking forward to doing another museum camp next summer.

On Monday, the kids will be in skateboarding camp together...wish us luck!!!
Posted by Good Times and Chaos at 5:04 PM