The cast comes off tomorrow! The cast comes off tomorrow! I could shout it from the rooftops. It has only been a week and a half and I fully realize that some people keep their casts on for 6 weeks. How stinky they must be!! Seriously. Pearl's smells bad after this short amount of time and is filthy. She did soak it once when I was washing her other hand and she threw the cast under the water.

But the cast is not why I posted this photo, this one is all about Pearl's "skirt." We were out running errands and I saved the most important one for last...you know, the one that I had to get done to feel like I had accomplished anything during the day. Pearl decides to poop through her pants. I am sitting there in the parking lot on a cold day knowing that I can't take a baby in wearing just a t-shirt and diaper. There were of course no other pants in the car.

I notice her pink sweatshirt and a skirt is born. Zipped up around her legs with the arms tied as a belt...boom! Errand run and Pearl looked stylish while doing it. 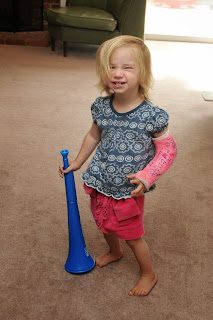 Posted by Good Times and Chaos at 9:37 AM