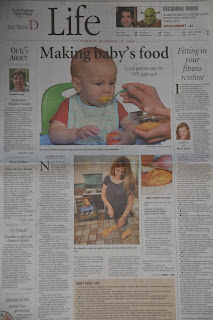 I have been meaning to blog more about Keller and food for a bit now. Vera, Keller, and I were outside the Santa Barbara Library with friends one day when a woman approached our group about baby food. Turns out she was a writer for the Santa Barbara Newspress and was finishing up an article about moms who make their own food. Out of our group of four moms that were there, three of us have or were currently making homemade baby food. At the time I had barely started Keller on rice cereal, but knew that I would be starting solids soon. They needed a picture of a baby eating a homemade meal for the article and so I of course was excited to have Keller be in the article. They also wanted a picture of a mom cutting up vegetables and I was happy to oblige.

Nonni and Nonno happened to be in town when the article came out, which was very cool. It was very exciting when my sister and I were sitting at Starbuck's waiting for our coffee to see the newspaper displayed. Keller's picture was also on the front of the newspaper (small in the corner, but still! :). I walked up to get my coffee and this woman started talking to me. I had Keller in my arms and she was holding up the newspaper article. She said "Hi" and before she could say anything else I said, "Oh my god, that is me and my son." She then proceeded to ask me where the movie theaters are in SB. So embarrassing!

When the photographer came to take his picture it was over in 10 minutes. I barely touched the food to Keller's lips and because he it was still kind of new to him he wasn't so sure of it. Hence, the photo of a baby looking clean and barely eating. Of course, I have to include a photo of what he looks like as he eats now. He is a little crazy man when he eats. He always tries to grab the spoon. If he captures it he has a field day spreading food around his tray, the chair he is sitting on, and anything else he can get his hands on. If for some reason he can't get the spoon he sticks his fingers in he mouth after the food has gone in and then spreads is all over his face and if I am lucky...into his hair. Every meal is just an excuse for a bath. 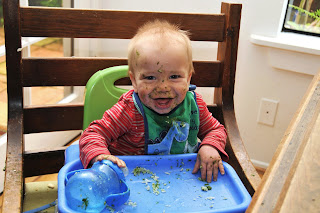 Posted by Good Times and Chaos at 8:37 PM

oh noooooooooooo I misspelled "mischievous"....as the kids say... "My Bad"

Wow K, you look like such the perfect mom in that article. I love how you followed it up with that photo of Keller making a mess. Hilarious!

Keara is an amazing Mom! I'm planning on letting her raise my offspring (and Mr. 1950s is beyond planning, he's ready for her to have them and we can visit on the high holidays - that would be the holidays on which he is high j/k ;-)