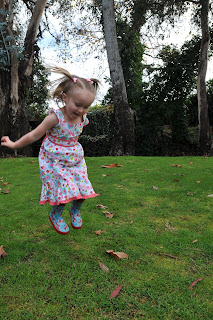 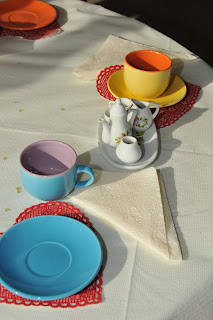 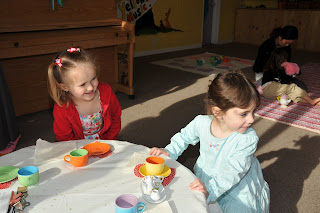 We started at Yellowbird about a year ago and it has become a favorite part of our routine. Yellowbird is where Vera takes her music class. Singing, playing instruments, puppets, and other explorative play with music is all part of the weekly routine. Alex, her amazing teacher, created a curriculum that is creative and engaging for both students and parents.

Vera and I first attended the parent participation class, but now at three she gets to be in the drop-off class. Along with attending the class by herself, at three she can participate in tea parties thrown by Alex. On February 7 she attended the Valentine's Tea Party where the kids decorated cupcakes, munched on yummy snacks, and had a fabulous time.

For the party Vera got all fancy in a dress that she received for her birthday (it is my new favorite dress, so darn cute on her). She was a bit nervous when I dropped her off, but when her friend Sydney arrived the fun began. We picked her up an hour and a half later and had to nudge her out the door, she could have stayed for another hour and still been having a great time.
Posted by Good Times and Chaos at 9:08 PM

Hey sis, I like the new borders/background on the blog!