Dancing With the Stars + a Really Big Box

Sunday night, I am checking my secondary email account...AND, I have Dancing with the Stars's tickets waiting for me. In my excitement (I signed up 2 years ago!), I accidentally clicked that I only wanted two tickets, not four. Oh well, that tiny mistake aside my immediate thought was, "Wait, the tickets are for this Tuesday!" There is no way that I can find a babysitter and someone to go with me in just a few short days.

I call my friend Deb, as we are both obssessed with the show, just for kicks to let her know and she is in...almost immediately. But, now between the two of us we have four kiddos that need lots of babysitting on a Tuesday. Did we do it? Of course we did! IT WAS AWESOME!!!

Much of our time was spent waiting in lines and peeing every couple of minutes. Our "tickets" weren't guaranteed. They say to arrive at 3:30pm, we got in line at 1:30 and were already number 68 and 69. Yep, we waiting in a line, by a bush for two hours before even making it in the gate. Once in the gate they send you to glorified extra long park benches for another hour or so. Finally, they start seating people and an hour later the show goes LIVE to the east coast. :) The peeing part comes into play, because as you are sitting on the benches, friendly staff keep reminding you that once the show goes live they don't want you to pee. Uhmmm...yeah, right. I totally went the bathroom during a commerical break! Telling me not to pee is like telling Vera not to whine. It is going to happen whether you want it to or not.

Tuesday featured the female stars dancing for the first time. As for the show...the judges are hilarious, the set much smaller than it looks on television, and I think Ozzy and Sharon Osbourne are amazing. You have to watch, but the whole Kelly Osbourne section made me cry! If you look very carefully, you can see my shadowed face to the right of the stage (if you are looking at if from the audience view). The only other BIG bummer is that they don't let cameras in, so I have no lovely photos to post!

A big shout-out to CC for babysitting the two kiddos for the long haul and bringing a HUGE box, which = tons of fun. 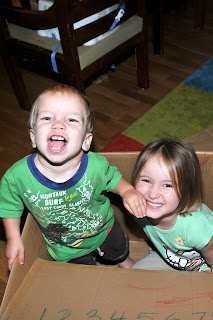 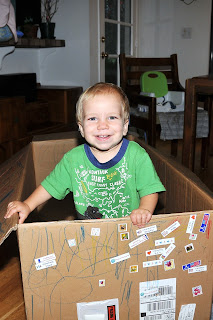 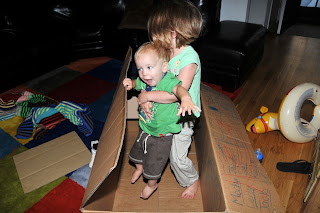 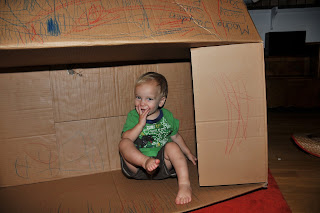 Posted by Good Times and Chaos at 9:51 PM

Notice in the 1st photo how Cooper is cowering under the chair! I love the last photo of Keller! I did ok w/ you camera!

Squeal!!!! Too bad they don't let cameras in. I would love to get a photo of me on the light up staircase.

We watched last night, totally didn't see you, but I saved it in case you come over.
And, hello, i TOTALLY LOVED Kelly. She was so amazing!

that is so cool you got to see DWTS (thats what the cool kids call it) :) im rooting for kelly!