Camping with kids, one under a year, is a roller coaster of an adventure. J and I had not until last weekend attempted a camping trip with even Vera and so we were shocked at ourselves when we decided to grab both kids and head out on a four hour car trip to Joshua Tree. It helped that good friends were going and we were both itching for a mini-break from SB life.

Joshua Tree is an amazing park. Our campsite (Cottonwood) was a bit far from the action, but we took a little road trip to Hidden Valley, hiked, and had lunch. There is lots to tell, but the pictures will explain much of what went on.

This is our POS tent that I literally wanted to throw in the trash can as we left. Each and every time I tried to open the darn thing the zipper got stuck, fine at 4pm in the afternoon, a total nightmare when I am trying to pee at 3am in the morning without waking kids. Keller peaking out of the tent, adorable. 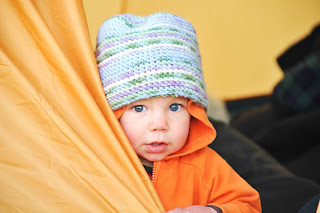 Next we have a prime example of camp life. Lots of eating, hanging out and when it got dark, socializing around the campfire at night. When possible we confined Keller to his highchair as the boy had one goal this trip...try to eat the entire desert as often as possible. Luckily, he was very content eating away in his chair, the fact that he gained 5 pounds in one weekend doesn't concern us. 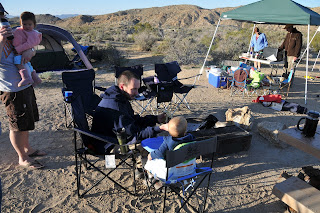 At one point J corralled him in a ring of coolers only to realize after moving them that a scorpion was chilling under one of them...YIKES!! Which does bring me to the topic of bugs and snake warnings. Thankfully there were no snake sightings, but by the bathroom a very frank sign warned to beware of where you sit. All I thought of every time I peed was what if a snake came out of the toilet. Ridiculous, I know, but that is what camping does to me. 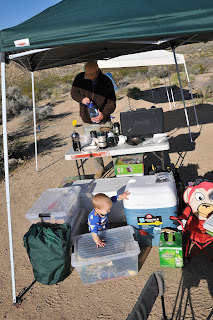 During our day trip to the Hidden Valley camping area, our whole posse walked a mile loop through some amazing scenery with the rock formations taking center stage. I love the photos of us walking, we look so insignificant compared to what saw. It was amazing. There was one minor snafu with Keller and a cactus that wanted to poke his eye out, but all in all very good. 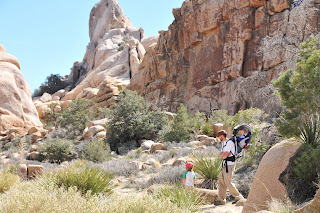 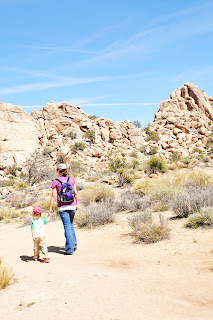 The 3-year-old kiddos...to cute for words! 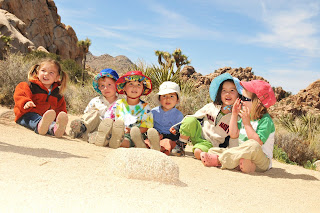 After the hike, each family went their separate way with some heading back to our camp and others to get gas. We needed gas so we drove to 29 Palms. There was lots of driving involved in the weekend. To get From Cottonwood to Hidden Valley took 45 minutes. To buy gas (and an ice cream sandwich or two), another 30. 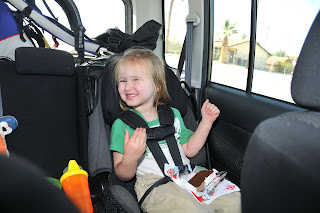 At that point after the hike though, we needed some family time and I wanted to stop at a few more of the attractions of the park and so the drive was nice...well, for everyone but Keller. We made a stop and I realized that Keller has been sleeping on one of his toys in his carseat. I don't even know how I managed to get him buckled with the toy at his back. It made me feel so bad and he was so calm about it.

Back to the story, we were back in the car and after 30 minutes stopped at the Teddy-Bear Cholla Gardens. These are some dangerous plants. J was earning his Dad keep and carried both kids through the gardens while I took pictures. I was so engrossed in getting a money shot of the three of them that I came within a millimeter of a close encounter of the cholla kind. 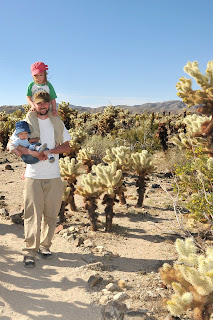 Favorite picture of the weekend taken on the last morning of our camping trip when the sun was rising and the lighting was gorgeous! 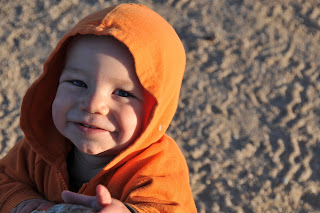 As this was our first time camping in a long time there are a few bumps we need to work out. Next time I am bringing dish soap, hand soap, and more blankets. All in all a good first trip.
Posted by Good Times and Chaos at 10:01 PM

You are brave girl! So impressed you went camping with the kiddos. I love blogs. I caught The Serene One up on your camping adventure (complete with scorpions). It was weird that I sounded like I just talked to you in person. Great way to keep in touch