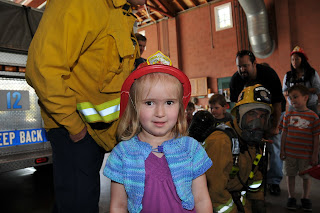 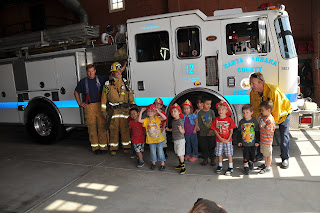 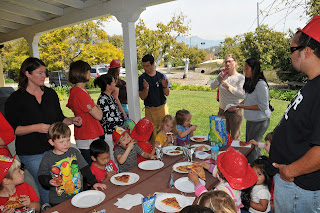 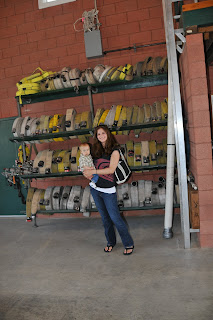 Fireman...hmm...while at a fundraiser in Santa Barbara we bought Vera a lunch with the firemen at Station #12. First, I have to say that some of my most vivid memories from childhood are of my mom and her friend scoping fireman out in Merced or whistling at them from the car window. For kids, they hold a whole different appeal, which can basically be boiled down to a really cool and HUGE red truck.

Vera's adventure, with Dad along for the ride, started with a fireman in full gear to show the kids how he would look during an actual fire. The kids then toured the truck followed by he fire station. The fire station is basically a boy's club with ping-pong, a gym, twin beds in the dorms, and two refrigerators. The kids were eating their lunch when the guys were called away to an emergency.

The last picture was when Keller and I showed up. I basically included it so that I can show off my new hair color.
Posted by Good Times and Chaos at 11:01 PM