My pops and I had grand plans for Road Trip 2009, which would move my father from Belleville, IL to Petaluma, CA. We had four days to travel 2037 miles and as my dad picked me up from the airport and our dinner at The Spaghetti Factory, we had big plans for getting an early start and putting some distance behind us.

Well, I realized the first flaw in this plan when I saw that there was quite a bit of packing still to do. Here we are in the happy moments before stepping into the house. 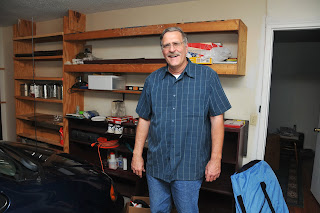 The second glitch in our plan...someone broke into his house. THEY broke a window, then "sorted" through his stuff, grabbed cash, and out they went. SO, not only did his money get stolen and window broken, the timing of the robbery was about a week before escrow was supposed to close on his house. Did you catch the "supposed to?" Yep, because idiot/idiots did this, the family that was to buy his house backed out of the contract. It just makes me want to scream.

Having never been the victim of a crime, the cop/detective/evidence guy experience was interesting. So CSI...with a Midwest twist. 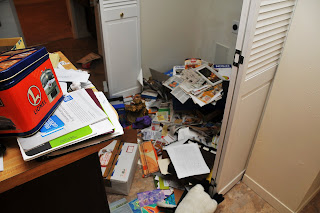 The positive note that came out of this whole mess was that I got to re-meet my dad's neighbor. I can't use enough positive words to describe this man. He was supportive of my father throughout this, as well as helping out at other times. 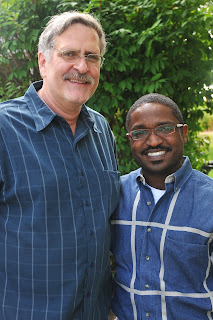 That is all the complaining! The next post or so will detail the trip, which was pretty darn awesome.
Posted by Good Times and Chaos at 9:30 PM