Opa earned a gold star this weekend for taking care of the kids while I was racing. I promised him that the kids would be great and he could throw a movie on if things started to go wonky. Well, he managed to survive the entire morning without a tv show...because he managed to break the tv at some point between turning it on and starting a movie. :)

Then, he stuck around the rest of the weekend while J was at his future brother-in-law's bachelor party to keep me company and help with the munchkins. Thanks Pops! We dragged him around to the Sea Center, the SB Zoo, and Steven's Park. 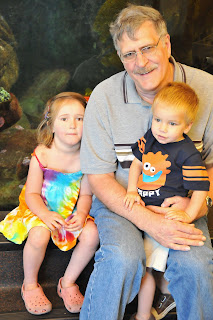 Oh, this picture, it was taken right before Keller turned the touch tank into a splashing water table. Good times! 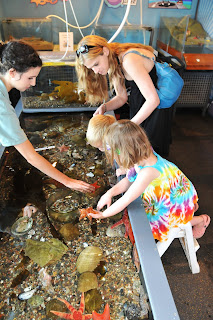 Posted by Good Times and Chaos at 9:28 PM