Jules is getting married and I was in charge of her bachelorette party! Seriously, I love to plan parties, but even the thought of figuring out a weekend in Vegas for my sister-in-law was intimidating. Yet, all said it went really well (I think!). Lots of pen-15 references and a bride-to-be that was ready to party. It was good times and then some.

Planning Julia's Vegas Bachelorette Weekend would not have been possible without my friend Lisa from high school. She picked me up from the airport, let me chill with her family for the night, and then took me shopping at Costco in the morning! AWESOME!

That said, I had to post this picture as it shows the ridiculousness of the first night after my airbrushed tan. Love glowing with no sun damage, but it definitely needed a day to settle and mellow. Oh, but I love being blonde again. It is like coming home after a very long vacation in momville. 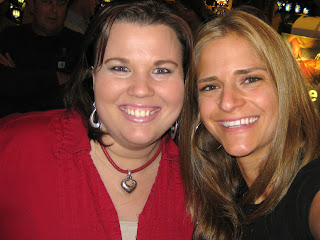 Now, back to Vegas! My first priority for the par-tay was finding a place where all 8 girls could stay together and that would still give us some spending money for fun. MGM Signature was an amazing deal. Great price and we had two suites that overlooked the MGM pool area, chilling in the lazy river was quite nice as well. 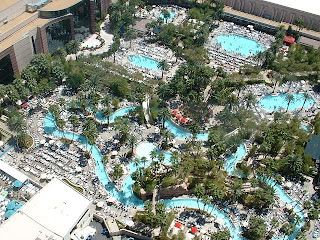 Jules gets big props for having fantastic friends who knew how to have fun and could hang with the best of them, mainly...me! Just teasing about that, but I planned an entire scavenger hunt and was so scared that everyone was going to think I was a HUGE nerd. Not the case, the teams were amazing collecting the "goods."

The one below, "a man wearing a gold chain" is my pick to show you, because Julia looks darn gorgeous in the photo. 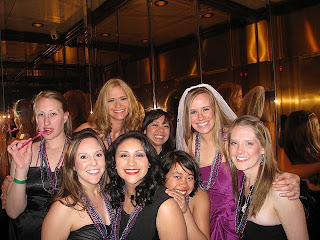 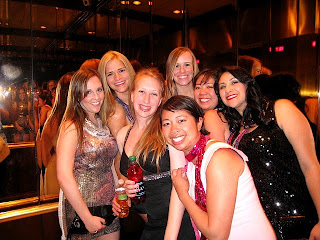 Okay, I love this shot of the two of us. BUT, that said it turns out I wore the most common dress in Vegas. Not only was one girl in XS wearing the same dress, but I was told by this dude that his sister was going to wear the dress the next day as a bridesmaid at his sister's wedding (you go Vegas wedding), and some guy walked by me to let me know that everyone was wearing the striped dress. Oh well, since I was already at least one red bull and vodka down...didn't phase me at all. Well, that and I only paid $20 for it at Ross. 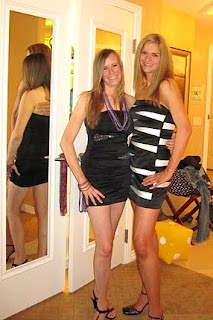 On the last day we walked it to the Bellagio. 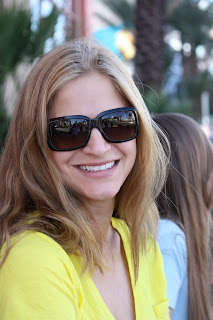 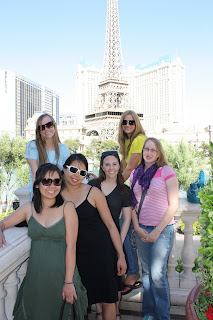 Excuse me, you have a huge butterfly sticking out of your head. Yes, yes I do. 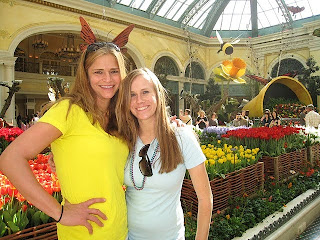 Posted by Good Times and Chaos at 9:28 PM

Fabulous! You look good in any shade, but my mental image of you is always as a blonde.

Scavenger hunts are so fun!

Holy crap, you coulda been on the Real Housewives of Orange County!
But the butterfly is cracking me up.
And common or not, that dress is awesome. The scavenger hunt sounds good, and props to Julia for just walking up to some random dude.

Keara, you are a HOT mama!