It was Vera's last day of Itty-Bitty Basketball at the YMCA! Well, her last class until the next session starts. She is enamored, loves playing and constantly asks during the week, "Do I get to play basketball today?" I couldn't be happier. Yes, I can already picture myself sitting in the stands cheering her on as she plays center for her high school basketball team, shooting the game winning basket in last 5 seconds of play. Who me? No, I haven't thought about it too much! I swear I will stop trying to live vicariously through my children.

Look at that smile! 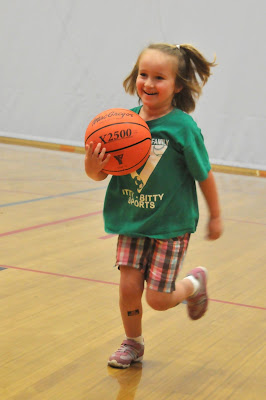 The kids were divided into two teams and played a scrimmage. This consisted of the kids running up and down the court looking a little lost and the coach trying to get all of the kids at least moving in the right direction. You could tell there were a few boys who got it (I am guessing this isn't their first session.:)
Vera wasn't overly concerned with where the ball was or where it was going, she just wanted to make sure that both she and Anna had their arms in the correct defensive position at all times...playing defense, sometimes during offense (which still works), and even at times when she was running up and down the court. She looked like a little bird about to fly away at any time. 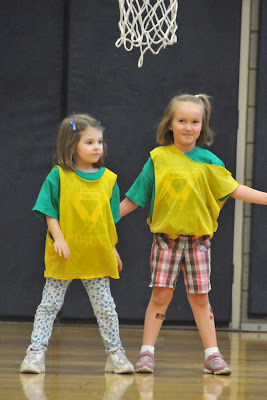 Oh, my shy girl raced up to get her medal and back again to the line before I could get a decent shot. 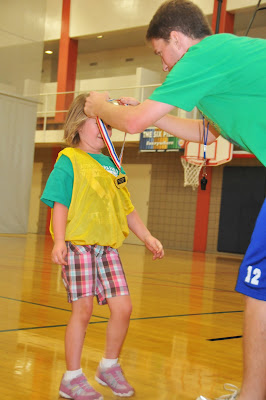 I did get this keeper! 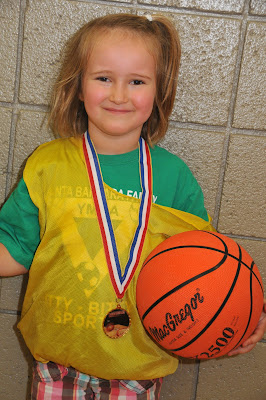